Gorodake located near the center of Maizuru. Gorokadake Park on the top of the mountain is known for its beautiful view. A complex intricate coastline of Maizuru Bay, which forms part of the Wakasa Bay National Monument Park, and green islands floating in the azure ocean … The varied landscape has been selected as the No. 1 place in “Kinki One Hundred Scenery” I will. The scenery that changes clothes every season is a fresh taste even when you visit whenever you visit, with fresh green spring, summer shining brightly in the sea, autumnal autumn falling in the mountain, winter when the cloud sea spreads, I will. – Quoted from Maizuru City official website –

Tanabe Castle (alias Maizuru castle) built in Tanabe’s land, Hosokawa Fujitaka (Yusai) who destroyed Mr. Ikeda by the life of Oda Nobunaga during the Warring States Period and flattened Tango. As a battlefield of the Sekigahara battle, Senso surrounded by 15,000 soldiers of Ishida Mitsunarihara castle castle in Tanabe Castle for about 2 months. At this time, it is a famous story that the siege was unlocked by Emperor Yosemi’s imperial command. It is said that it was because Shuzai was the only person to tell “Kokin”. Currently the main train of this castle is a beautiful park and a place for citizens to relax. – Quoted from Maizuru City official website –

The weeping cherry tree of Yoshida 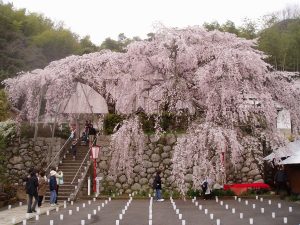 Cherry blossoms in Yoshida area Maizuru city, Kyoto prefecture. Cherry trees of old tree called tree age 300 years and two pairs of young trees of age 80 years, cherry blossoms bloom in the cherry blossom season. It is said that a friendly friend starts sending seedlings from Kyoto in order to honor the heart of Lord Kozanishi Masaru Masaru Lord who is suffering imperial rule and going to Distribution in Tango.- Quoted from Wikipedia 【The weeping cherry tree of Yoshida】 –

It is a steel slanted bridge made of steel and hanging over Maizuru Hira Bay which became the base for withdrawal after the end of the Second World War. It was opened in May 1999 (May 1999). The total length is 735 m, the height from the water surface to the top of the main tower is about 95 m, the cable is fan type, the maximum span length 350 m is the scale next to the Shinminato Bridge in Toyama prefecture on the Japan Sea side. It was designed by imagining two cranes, the main tow was made by crane’s beak, cable was made by imagining feathers and named “English crane bridge” “crane bridge” .- Quoted from Wikipedia 【Maizuru Crane Bridge】 –

Maizuru city has many red brick buildings built during the Meiji Period from the Meiji era to the Taisho Period in association with the opening of the former Navy Maizuru Shimbun Office in 1901 (Meiji 34).
Among them, “red brick warehouse group” of 12 buildings in total consists of eight of them designated as an important cultural asset of the country and grand opening as “Maizuru Red Brick Park” in Heisei 24 did.- Quoted from Maizuru Red Brick Park website –

King Kong Government was held by the Takatoryama royal prince in the early Heian period, emperor Shirakawa was reportedly founded in the middle of the town, and houses many cultural assets including the Mie Tower of Important Cultural Property. Among them, Fisha large statue is a representative masterpiece of the name Buddhist priest of the Kamakura period.- Quoted from Maizuru sightseeing net website –